The final few weeks of the triathlon season finishes for 2016 and a lot of activity for the Focus on Fitness athletes. Tri the Hook took place on Aug 20th, this is a very popular local race in the South East. This year it was a national series race which drew a big crowd. The weather was bad on the day which made for a tough swim. Focus on Fitness was represented by Darell Evans, Tom Cousins and Maggie Murphy. This was the home event for both Tom and Maggie and both had a great race.

The following day the annual Sean Kelly Tour of Waterford took place. David McConnell, Aine Kelly and myself did the 160 km, David Connolly, Thomas Kirwan and Ciara Mc Sweeney did the 100 km. This is always a great day out, with some of the toughest climbing in the area on the 160 km route.  The food stops are legendary  and well worth doing the cycle for that alone, this year was no different.

Ironman Vichy 70.3 Aug 28th. Tim O’Brien and Bernie Mockler traveled to France for this race. The temperature in the week leading up to and on race day was up on 40 deg. This resulted in a non-wetsuit swim on the day and Tim unfortunately didn’t make the swim cut off. Bernie missed the cut off on the bike by less than 2 min. This was bitterly disappointing for both of them but will be back again next year.

Dublin City Tri was next up on Aug 28th, this is one of he biggest city races in Europe. A  spectator friendly race with the bike and run section loops in the Phoenix Park. This was race 9 for Maire Lawlor in the Tri 10 race series. Maire had another consistent race enjoying the atmosphere, with the jailbreak race left in the series of 10 races.

Cill Barra 6km run was on Sept 4th. This race is growing each year and a great local race. The 2 loop course was very helpful with very windy conditions on the evening. I took part myself in the race, next was Darell Evans, Nigel O’Sullivan, Tricia Quinn, Liz Nolan, Peter Whelan, Lorena Mooney, and Eimear McSweeney all from Focus on Fitness.

Later that night Irish time Eoin Lyons was taking to the start line of the Ironman 70.3 World Championships in Mooloolaba in Australia. This was a big race and a lot of effort and training was put into the preparation for this event. Eoin had a great race finishing in 4:14 and 16th in his age group. Taking some time off his previous PB in Dublin only 3 weeks previous. Some better things to come over this distance. Eoin missed the last 2 races in the super series with traveling to Australia but has provisionally taken 3rd place in the series again this year. It was a great result mixing 2 distances and 2 different types of racing at the same time. Read Eoin’s Report Here.

Paralympics Rio 2016. After a lot of work over the last 3 years Damien Vereker made the Irish cycling squad and represented Ireland. He was piloted by Sean Hahessey at the games and they made a good account of themselves. They competed on the track in the 4 km pursuit finishing 8th place. Next up was the kilo and they finished 8th again. The road campaign started 3 days later  and they finished 6th in the road TT.  The road race followed 4 days later and they made a brave move making a break from the start. They had a 1 min 40 lead at one stage but when no one came across to them  they had the impossible task of trying to stay away alone. They had to withdraw from the race from exhaustion with 30km to go. We will have more to follow on this later.

Sanofi 5 mile road race Sept 9th. This is another great local 5 miler on a fast course, with all  proceeds raised going to MS Ireland. I took part again myself trying to get some pace back in the legs, next up was Eammon Ryan running a PB and running very well at the moment. Neil Griffin, Liz Nolan, David McConnell running with his son Evan, Nigel O’ Sullivan, Maggie Murphy, Peter Whelan, Eimear McSweeney, Aishling Flood all taking part. Jim O’Brien took a break from long distance and also ran with his son Dale. Race Results

The Jailbreak Triathlon in Cobh Sept 11th. Tom Cousins stepped up to  Olympic distance to finish off the season for the 1st time. Maire Lawlor also took part in Olympic distance for the 1st time and finishing of the Tri 10 series. That was the end of 10 races for 10 people who haven’t done triathlon before. It was a great achievement and the opportunity to experience a lot races all over the country. Maggie Murphy took part as well and had a great race building up distance for some big races in 2017. More bad weather made for a tough swim across from Spike Island, but once out of the water it made for a very enjoyable race. Race Results

Charleville half marathon 18th Sept. Eammon Ryan took part in this great half marathon. This is a great race on a fast course and always very well organised. Eammon ran 1:33 and a great time for a first half marathon.  The Danesford 10km was on the same day and Liz Nolan competed in the race.

Vadrafjord hospice 5 mile race, 25th sept  this is another great race for a well deserved cause on a fast course. A big turn out on the day and Focus on Fitness was represented by myself, Tricia Quinn, Liz Nolan, Nigel O’Sullivan, Ronan Todd, Peter Whelan, Maire Lawlor, Eimear McSweeney. A big thanks to all that marshaled on the day, and The Reginald for refreshments afterwards. Race Results

Moby Dick sprint triathlon. 25th Sept This is one of the last races in the triathlon season. Bad weather resulted in the race postponed from Sat until Sun and lucky enough the weather and sea conditions were a lot better on the day. Darell Evans, Neil Griffin, Maggie Murphy and Aishling Flood all took part from Focus on Fitness. It was a great end to the season for everyone and all finishing with some good results.   Race Results

Classes have started back for the winter… 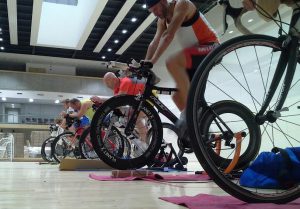 Delighted to be able to use the studios in WIT Arena for Functional Movement Class (Monday) and Turbo Training (Wednesday).

Pay as you go available if classes not full. Call for  Info