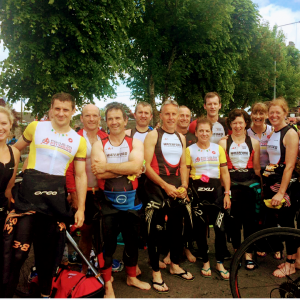 This is one of the most popular races in the Triathlon calendar, and this year was no different. With 4 different race distances and over 2,000 people taking part the atmosphere was amazing; made even better by the good weather conditions.

Next up was Olympic distance: Focus on Fitness had 4 inside the top 10 in this race. There was a big battle going on at the front of the race between Rory Sexton and Eoin Lyons but in the last 2 km the athletes were sent in the wrong direction putting an end to what would have been an exciting finish. The top 3 decided to cross the finish line together showing a great respect for each other.  Eoin Lyons was officially 2nd in 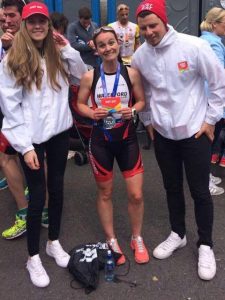 A big well done to everyone in this race, I hope I didn’t forget anyone! A lot of good results and some great finishes for a lot of athletes who were racing or moving up to longer distance for the first time.

Maggie Murphy took on the challenge of the Cork City Marathon in preparation for Ironman later on this year. She had a great run finishing in 3.59 taking 27 min off her previous PB for the distance. This is a good confidence builder going on for the rest of the year.

One of the last Duathlon races of the season, this race is based in Watergrass Hill in Cork, part of the Hillfest weekend. The distance was a little reversed on this one with a 3 km run, 20 km bike and 5 km run to finish off. Jason Travers was racing again this weekend and took victory in the race. Another good weekend for Jason and a well deserved win.

The Munster TT Championships took place in Patrickswell, Co. Limerick. The weather on the day made for a tough bike on the 18km out and back route.   I stopped the clock on (25:45), and Jason Travers, took away a Munster medal with 3rd place in the  A4  category in (26:57). 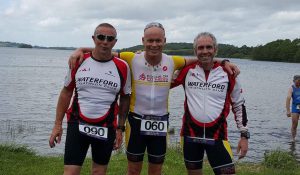 Tri an Mhi Olympic distance Triathlon took place in Collinstown, Co Meath.  Nigel O’Sullivan,  David Mc Connell, and Jim O’Brien,  made the journey up for the race. The conditions again that weekend were tough on the day. David finished in 2:29, Nigel 2:46, and Jim in 2:55. 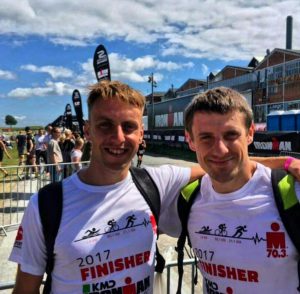 The Ironman 70.3 European Championships took place in Elsinore, Denmark. Focus on Fitness had Eoin Lyons and John Hayden taking part. This was a big race for the lads as they build up to the World Championships later in Sept. The course was fast but technical with a total of 15 buoys in the swim and nearly as many turnarounds on the bike.

Eoin put in a top class swim (23:51), putting him well up in his age group. John swam a very solid 30 min for the 1,900 mtrs. With the swim behind them it was out on the bike course for both lads.  The temperature was rising and it was going to be a very hot run for this race. Eoin biked 2:14 averaging 40 kph for the 90 km bike ride. This placed him in 2nd place in his AG heading out on the run. John was not far behind biking  2:18 another very good bike time  for the distance. The heat was starting to take its toll. 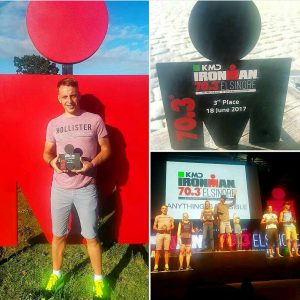 Eoin had to dig deep to try to hold on to a podium place running 1:24 taking 3rd in his AG, another podium place, this time a European place finishing in 4.08. He was well up overall and 5th age group athlete over the line.  John ran 1:40 and finished a very respectful 4.35. This is only Johns 2nd year in triathlon and he is already competing at a very high level. 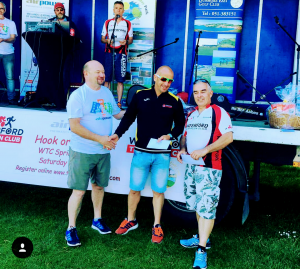 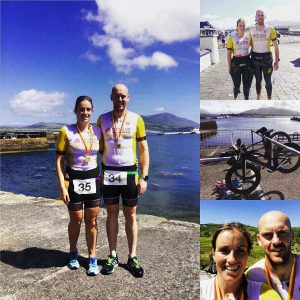 An old favorite and a very popular race. A lot of people make the trip to Valentia Island, South West Kerry every year for this scenic sprint triathlon.

This is a great race, with the novelty of getting the ferry to the mainland for the swim back to the Island starts things off. A tough bike and uphill first half to the run makes for a challenging race.

Brian and Katie Jacob made the long trip back to where they started their triathlon careers. Brian finished in 4th place in 1:05 and Katie finished in 1:26, 8th female.

Blessington Olympic distance triathlon also took place on what was a very busy weekend of racing. Jason Rosey and Paul Cahill took part in this race where the conditions were very hot again. This was the first triathlon race of the season for both lads, with Paul finishing in 2.43 and Jason in 2.58.

Round 5 of the Invacare paracycling league took place in Wicklow on June 17th. Seamus Wall continued with his consistent racing taking 2nd place again on this round in the hand bike category. This was followed on in his native county, with the National TT Championships which was held in Johnstown Castle in Co. Wexford.  Seamus took silver again in this the biggest race of the season.

Damien Vereker continued with a great season winning in Wicklow and also winning the open category at the National Championships another great result for Damien. Both Seamus and Damien are heading off again to compete in the next round of the Para-cycling world cup  in Emmen Holland on July 1st and 2nd.

Another great local race with a big turn out from Focus on Fitness athletes. The new route started in the city centre, headed out of the city over both bridges, on to the new Waterford Greenway with the finish at the WIT Arena in Carriganore.

With over 3,000 people taking part this year it puts it high on the list of marathons in Ireland. A  few of us made a brick session out of the day and did a couple of hours on the bike before the start.

Some more great results and plenty of PB’s across all distances.

Another great month and a lot of great, consistent performances by all at Focus on Fitness.

Summer Classes ** OPEN TO ALL**

Call Martin for info, message on fb or email…