I was sent on a link to a blog yesterday that I would like to share with you.

As a lot of people know I am involved in working with Para-Athletes. In particular over the past few years with coaching Damien Vereker in his bid to get considered for Rio.

The final piece that we need to finish off this job was to find a good tactical pilot for the front of the bike. We had heard of one, a cyclist from the New Ross area, so we went in search of Marcin Mizgajski. Just as the blog says, I too knew of this guy, had met him on the roads while out cycling and had read plenty about him. 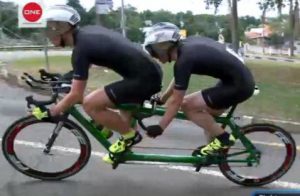 Over the past 12 months I have got to know this coffee loving, cycling fanatic, all round great guy and now a proud Irish man.

Little do you know

Marcin Mizgajski first showed up on my radar like a ghost. I’d heard there was a ‘Latvian’ dude doing laps of the ring-road at warp-speed, however I hadn’t seen him. And then like Casper, he latched on to the back of our training group on the Ring Road, turned out to be Polish and had so much enthusiasm and strength that we are still the best of friends today. 12 years later, each other’s biggest fan. I’ve forgotten a lot but theres a few chapters that are stuck in my memory. Miz was a tri-athlete when we met but it didn’t stop him doing road races. In Poland, only priests teach religion. I picked up Miz in my car for his first Comeragh league race. We drove to Waterford, The Offspring blaring on the car stereo. I explained to him that I was teaching religion in Tramore at the time, and I was cursing the little f##kers that never listened. He put two and two together and tried to figure out how he was in a car with a cursing priest who liked California punk. He was baffled. But thats ok, for I was extremely baffled as to how the blondy haired dude had driven all the way from Poland in a Trabant, belching smoke, the only two-stroke car to make it to New Ross EVER![With his future wife and their belongings]. If Miz sets his mind to something, thats it. His Ironman in Lanzarote was a group effort where his enthusiasm and work ethic pulled cyclists, swimmers and runners together to get his long training done. And then he did it. The amount of times years ago we rocked up to races with one-day licences and got placings, much to the annoyance of the organisers. Miz has that ability not to race lots but yet show up and light a fuse. When we went on tour like that we laughed all day, returning with sore jaws from the banter. Not for us the tradition and bluster of provincial road-racing. But nobody puts in the work like Miz. I’ve been lucky to trace our way to Wexford in deep snow, done the hilly spins in the dead of Winter with him, hung on for dear life during intervals. I once filled the car-boot full of water as Miz did motor-pacing behind in the rain. Theres always an espresso somewhere. Theres the feeling when you are near Miz that you can achieve. Bullshit is not tolerated. I’m an also-ran in races but Miz has an ability to get the last drop out of every situation. With him I’ve had my best results. He IS endorphins. The Gorey 3 day…winning a stage stuck in the 39. Or winning the time trial because he knew all year he would. Riding the Ras twice, Setting the world alight at the Ras Mumhan. Determined to work in a leisure centre and getting the qualifications to do it. Being so focused on the County Champs as to win it over and over. Oh, and a Leinster Championship too! So its no big surprise to me that I’m writing this blog 48 hours after Miz the pilot and Damien the stoker won the road race at the world cup round in Pietermaritzburg South Africa, after a bronze in the time trial. No surprise to me that that tandem pairing is a success. Theres two very determined blokes on board and the more the odds are dead against them, the more likely they are to succeed. Here’s hoping….

Gold Medal For Damien and Martin 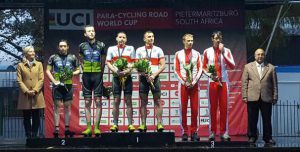